On a recent trip to the Guardian and Observer offices I met a number of International journalists, and was struck by how many different ways there are to get into the industry.

As a journalism student it can be very frustrating to hear that there is no clear path to break into the business. While this is a widespread trend, I was soon to learn that few newspaper work forces are as diverse as the Guardian and Observer’s… 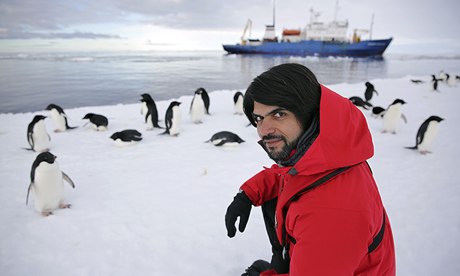 Over Christmas last year, Alok and his colleague, Video Producer Laurence Topham, broke the cardinal sin of journalism and became the news. On an expedition to Antarctica to explore the effects of climate change they, somewhat ironically, got trapped in ice. An international rescue mission swiftly followed which led to days of being interviewed by the world’s media outlets.

Alok studied a degree in Physics before deciding he wanted to be a music journalist. While that dream didn’t quite come true, he did get a job as  a “bog standard news reporter” (his words, not mine) and has been working at the Guardian since the launch of the science supplement. His advice to journalists is:

“The way to become a great journalist is to practice your craft and learn how to tell stories in different ways.”

Sarah is  a journalist with one of the most unexpected backgrounds. She started off in the military, and surprisingly, her no nonsense manner is invaluable in her role as an editorial manager. She is responsible for the budget and staff, including keeping tabs on foreign correspondents and bailing them out with wads of cash when they are stuck in the middle of a war zone.

When I asked Sarah about her route into journalism she explained that she started out on a Guardian supplement, moved to the family section and then onto news, she has also run the Positive Action Scheme:

“People do move around the sections of the newspaper quite fluidly” she said.

Shiv studied Journalism at Masters level in Sheffield with the help of a Scotts Trust Bursary, and began his journalism career at the New Statesmen. He has since gone on to write for the Observer, the Sunday Times, and Prospect Magazine and is the author of Jilted Generation: How Britain Has Bankrupted Its Youth.

The book nearly earned him a jail sentence, but he successfully defended himself against having to disclose his sources at the High Court. Shiv gave me one of the most practical tips of my trip:

“When filming something you want to send in to a newspaper or put on Guardian Witness,  always film like you are watching TV, hold your phone sideways otherwise they won’t take it.”